Sunset over the Pacific

When the sun sets in Central America a new cast of characters comes out to play. Pesky mosquitoes, big fat toads, fast hopping frogs, banded geckos, and bats rule the night. Fortunately, our casita is equipped with screens to keep out most of the unwanted pests, but ants, spiders, and geckos still found their way inside. There seemed to be an unending trail of ants parading up the wall and into a hole in the corner. They carried off tiny grains of sugar spilled on the counter while sweetening the morning coffee, and larger bugs that died of natural causes. I didn’t particularly mind their cleaning efforts, nor did the surprisingly loud chirp of the geckos cause me to lose any sleep.

The bats however were another story entirely. Most nights we saw them flying in fast circles at the top of the restaurant palapa. They were high above and harmless. We staggered back to the casita each night around 8pm, exhausted from a full day in the sun. Rather than bothering with lighting any candles, we usually went straight to bed, anticipating an early morning of starting the fire for coffee and making it into the water before the peak high tide. One night, Ryan woke me around 11pm with the flashlight following a bat on its circular path around the room. It seemed a little disappointed in the small size of the room and was loudly bumping into the walls on each orbit. Occasionally, it would dart lower, making a pass only a few feet above our heads, but it wasn’t enough to disturb my sleep and I rolled over and went back to sleep. An hour or so later Ryan woke me again. “Look!” He pointed the flashlight directly above us and it seemed the bat had tired and was resting in classic bat pose, hanging upside down, peacefully wrapped in it’s wings. “He’s sleeping, it’s fine, go back to sleep.”

Another few hours had passed and the bat was done with his nap and circling again. This time, Ryan had had enough. He went outside and grabbed a 7ft long piece of bamboo we had cut to transplant, and began using it to sweep the ceiling and try to shoo the bat out the open door. This sent the bat into even more of a frenzy. I put the sheet over my head only moments before Ryan swatted the bat, sending it into a dive. It landed on my shoulder with a gentle thud then bounced into the corner. Ryan immediately threw a towel over it.
Just when he had it cornered, we heard more flapping. “Tell me there isn’t another one!” Unfortunately, there was. I got one quick look at the little guy huddled in the corner before Ryan scooped him up and tossed him outside. He looked like a little brown mouse with a wider head and longer arms that held his wings.

“Why do you have to mess with such a cute little thing?” I asked. Ryan reminded me of the story we heard on NPR a few days before the trip about rabid bats. I wasn’t worried, but the rest of the night he insisted on sleeping with his neck pillow as a bat guard, worried about Rabies shots in the stomach.

My boyfriend Ryan and his bat guard

I fell asleep dreaming of all the empty nighttime waves we would score as vampires. A few days later we had our builders come out and plug up the small holes in the roof, and the bat battles ended for good.

When we got home, Ryan still had bats on the brain. He started thinking the bat might have bit him. We researched rabies and bats online. From what I could tell, most rabies came from vampire bats which do exist in Nicaragua. But, were these cute little bats in our casita actually dreaded vampire bats? 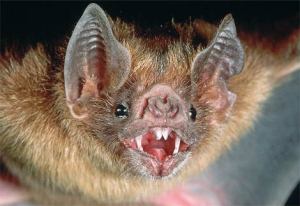 I found this photo online of a vampire bat. Our bats didn’t look nearly as scary, but then again, I never got a good look at the face. I tried to compare this photo to the photo included above of the bat on the blue broom. They looked similar, I guess, but it’s hard to tell.

After reading more about rabies I learned that once symptoms of the disease start showing, there is 100% mortality rate. Basically, if you get the disease, you die, every time. Of course, you can get shots, but that’s not as easy as it seems. After a whole lot of hassle, calling the doctor, the county, etc. Ryan finally started getting the first of 10 shots, all in the butt. He wasn’t happy, but at least now he can mess with whatever critter comes his way for the next two years without any chance of getting rabies!

This entry was posted in Surf Life Nicaragua. Bookmark the permalink.