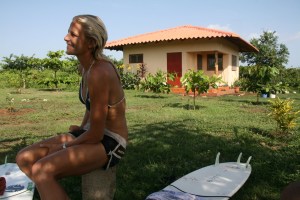 I’ve been trying to keep it a secret. Ryan keeps reminding me to keep it mellow, but it’s hard to contain my enthusiasm. I found heaven and i’m the type that wants to share that with friends.
I’ve tried at least limit my stories to close friends, but the number of people i’ve told is growing. We have had a couple friends sneak down with us already, but in August that number went up exponentially.

It started with 15 year old Shelby Detmers. I had been coaching Shelby a bit and when I told her dad I wouldn’t be able to work with her for a few months since I’d be in Nicaragua, he suggested coming down to meet me. Perfect! She brought her friend Chloe Buckley. 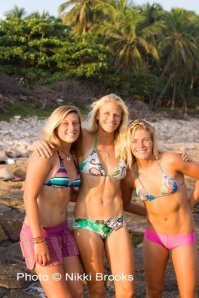 Shelby Detmers, Chloe Buckley, and I

Shelby and Chloe getting to know Ducha on the porch

My favorite redheaded father/son surfing duo from Redondo Beach, Chad and Conor Beatty happened to pick the same week to cruise on down and check out why i’m not nearly as motivated to surf at home as I used to be. 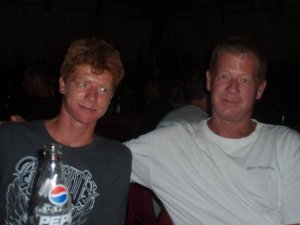 Conor was excited to try out the machete

Kim Mayer is one of my favorite people on the planet. I spent the last three years traveling the world with her and now that we have both stopped competing I miss her all the time. I hadn’t seen her in way too long so she suggested coming down on a quick little warm water surf trip. 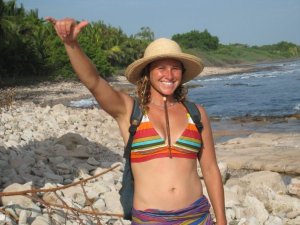 Kim Mayer lives in Santa Cruz, studies Permaculture, works on an organic farm, drinks coffee out of a glass jar, and is one of my favorite people on the planet. 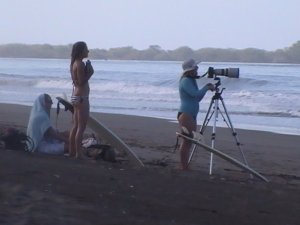 Finally, I got a random email from Jessica Oswald who went to UCSC with Kim, and I had met back in the NSSA days saying that she and boyfriend were planning a trip to Nicaragua and were looking for advice. 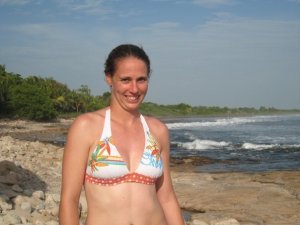 Jessica Oswald moved to Wisconsin for med school, picked up wake surfing, and ended up with a boat sponsor and a national championship.

One of things I miss most about hanging out with Kim is the evening jam sessions.
Those crazy coincidences resulted in a very busy friend-filled week of surf in which I got very little done on the land, but was really happy to show my friends my new paradise.

Below is a little introductory story I wrote and some photos.
Enjoy…

I don’t miss surfing in contests. Ok, I’ll admit it, sometimes I do. But it certainly isn’t the memories of jersey-clad nervous paddle-outs into knee to waist high slop that get me feeling wistful. It’s the friends. After more than a decade spent traveling the coast of California and then the whole wide world to meet up with a collection of wild and crazy adventurous girls, it’s hard to readjust to “normal” life.
My hometown is awesome, but it’s cold, and while the waves do get hollow, 99% of the time they close out and send you tumbling into the sand split seconds after takeoff. I’m sure there are cool adventurous females around, but they are married with kids and jobs, or are still in high school. I often find myself hanging out with sixteen year olds, which has its upsides. Sixteen year olds are stoked. Sixteen year olds surf everyday and call to ask me if I’m going to surf even when it’s knee to waist high, sloppy, and impossibly closed-out. They ask me for tips on how to perform better while wearing jerseys. I do my best to give them advice, passing down wisdom and storied experience, and they pay me in copious amounts of contagiously optimistic positive energy.
Still, adjusting to “normal” life is awkward. Without a contest schedule dictating my plane ticket purchases, I get antsy after a month at home. Sure, the routines are nice. I don’t particularly like flying, and I am obsessed with shopping at Whole Foods. But after a few weeks have passed I start to twitch just a bit. I’m addicted to that feeling of new experience, of travel and adventure. So, I rounded up a mixed crew of longtime friends that I met while wearing jerseys that have since hung them up and gone on to new lives, and fired up young competitors only just beginning to figure out the world of organized surfing, for a quick little trip down to a beautiful beach in Central America, a warm water playa hermosa with plenty of hollow waves and good vibes.

Nothing like a sunrise surf in warm water with friends.

The porch was barely big enough to hold all the friends, but Ducha loved all the attention.

Jessica is from Hawaii and had to demonstrate her coconut opening skills. 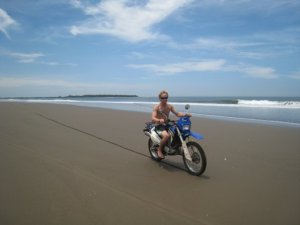 Jessica’s boyfriend took a lonely ride down the beach. 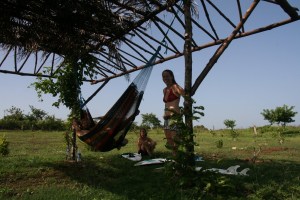 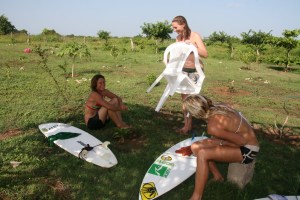 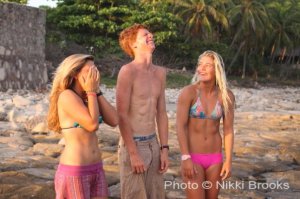 Conor is a stud, even if he is too shy to admit it!

Conor and Chloe both were charging so hard their boards couldn’t keep up!

This entry was posted in Surf Life Nicaragua. Bookmark the permalink.