Save the Waves Coalition 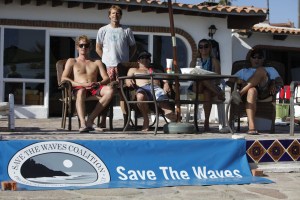 If you love waves and want to protect them, don’t worry you are not alone, and yes you can help. But first, a little back story-

Once upon a time there was a nice man named Will Henry who loved riding big waves and wasn’t afraid of a little cold water. He picked up on a secret tip from a friend who told of a magical place with big waves, cold water, and very few other surfers. Will bought a plane ticket, traveled across a continent and an ocean to an island many people have never heard of and found the rumors were true. He rode waves and fell madly in love, keeping the secret mostly to himself. 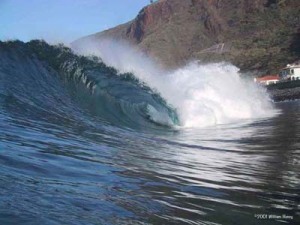 Of course, there’s no story without a good villain, a bad guy lurking behind the scenes, hatching evil plans to thwart our hero’s enjoyment. In this case (as in so many others) it’s a government in the black cape with sinister plans to construct a new coastal road complete with a seawall to protect it from the large waves, which would surely create backwash and alter the lineup. Will’s one true love was in danger, but what could he do?

Will went home and tried to get help from other organizations dedicated to these sorts of causes, but found no one to fight along with him. He was forced to form a brand new organization and Save the Waves was born. Tragically, he wasn’t in time to save his love from harm, but is now all the more determined to prevent the loss of another.

Save The Waves Coalition is a global nonprofit organization dedicated to protecting and preserving the coastal environment, with an emphasis on the surf zone, and educating the public about its value.

Of course, it all comes down to money. You can gather all the bearded tree-hugging hippies and Che Guevara t-shirt wearing college kids you can find to chant and sing and wave signs to no avail. But turn up with hard data assigning a dollar figure to a resource like a world-class wave, and you might start getting some attention. Which is exactly what Save the Waves and some partners have been doing.

One of the first studies focused on California’s big wave jewel, Mavericks. Rather than paraphrase, I’ll just cut and paste the press release right here:

October 29, 2009, Half Moon Bay, CA – Save The Waves Coalition announced the preliminary results from its second “Surfonomics” study, a measure of the economic value of the world-famous big-wave break at Mavericks in Half Moon Bay, California. The study found that the surfing site and area has an estimated economic value to visitors of nearly $24 million per year, based on approximately 420,000 annual visitors.

“Mavericks is an iconic, world-renowned surf break that’s truly unique,” said Save The Waves executive director Dean LaTourrette. “This study provides evidence of not just its environmental value, but of its economic value as well. This further reinforces the notion that it and other special coastal areas around the world need and deserve to be protected.”

The study combined the economic value visitors place on the wave with intrinsic or cultural values of a coastal location with a world-class wave such as Mavericks. An important goal of the project was to build a model that can inform decision makers in coastal communities with important waves around the world. While prior studies of the value of waves have focused on the economic impacts of a contest or industry to local economies, this study looked at the benefits that surfing provides to surfers and observers by focusing on the value they place on the Mavericks wave through what they give up to experience it, as well as their qualitative comments.

The study, entitled “The Value of a Wave: An Analysis of the Mavericks Region,” was conducted by University of Hawaii Economic Research Organization, in partnership with the Center for Responsible Travel at Stanford University, under the guidance of Save The Waves Coalition. The study was made possible by a grant from the Morgan Family Foundation, and Mavericks Surf Ventures as well as contest sponsor Jim Beam helped promote and support the study.

The results come just in time for the 2009/2010 Mavericks Surf Contest® opening ceremonies, which will take place at 2:30pm on Friday, October 30, 2009 at Mavericks Beach followed by a reception at 4:30pm at nearby Oceano Hotel & Spa. Save The Waves will be on hand at the event with more detail about the study.

1) The wave at Mavericks has an estimated minimum economic value to visitors of $23.9 million per year.1

2) The average visitor is willing to pay a minimum of $56.70 per trip to the Mavericks surf area.

4) The study did not include the Mavericks Surf Contest, which has drawn anywhere from 10,000 to 50,000 people to the area on contest day, and thus results in additional economic value to visitors each year.

5) Almost 90% of the respondents labeled surfing an ecotourism activity, and thus important to the cultural and environmental health of the community. Respondents believed that Mavericks helped to positively define the Half Moon Bay area.

1 Based on estimated visitation levels of 421,431 per year

It’s about the waves, but it’s also about the people.

And besides doing such great work to protect waves all over the world, the Save the Waves people also happen to be super cool to hang out with. We recently cruised down to Gaviotas for a weekend community building conference and scored perfect weather and pumping surf. Think these guys have good karma? 85 degree weather and overhead swell seem to prove they do!
Check out a few photos from the event. Photos by Sachi Cunningham.

Having a beer with Save the Waves Environmental Director Josh Berry.

Sunset view with plenty of cold cervezas and new friends to get to know.

Did I mention the surf was pumping? By lunchtime on Saturday I’d already surfed for 5 hours, but seeing another perfect set had me fired back up again!

As Dean says, it’s all about building community. I was super excited to meet Kathleen Egan and Sachi Cunningham, two incredibly intelligent and inspiring ladies.

Josh Berry, the Environmental Director for Save the Waves got us all caught up with a few of the projects in the works, as well as representatives from Pro Peninsula and the Ensenada Chapter of the Surfrider Foundation.

After the serious business was finished there was the business of emptying the bottles of tequila and listening to this very important public service announcement on proper spanking technique put on by neighbors. Very educational.

Want to get involved????
Go to the Save the Waves website by clicking this link.
Become a fan of Save the Waves facebook
Hope to see you at the next event!

This entry was posted in Giving Back and tagged holly beck, save the waves. Bookmark the permalink.