I’ve tried to be an actress a few times. There was Jr. High drama class, one year of high school drama, a few skits back when I was going to church camp in the summers, but nothing too serious. As a blonde-haired surfer girl living in LA with that “classic Californian” look, I’ve been invited to audition for a few commercials. After I was at the top of the pack but still turned down by Coke, Dodge, and NetZero, I had pretty much given up. I even read for the lead of Blue Crush and a few other pilots by the same director with no success.

Finally, last summer Microsoft thought I was cool enough to use and I had my first acting job. All I had to do was ride a longboard at tiny Leo Carillo and read a few lines like “I’m a PC and I ride longboards”. It was a fun day, I made a little money, and was stoked for the next few months every time I deposited a residual check. It also built up my confidence a bit.

When a friend of a friend called to tell me about a new independent feature film called Beautiful Wave, “a coming of age story about surfers but not necessarily about surfing,” it caught my interest. I was asked to drive to Burbank to read for one of the main characters. In the past I shied away from those sorts of things, but this time I really liked the character and embraced the opportunity.

I felt confident at the audition and left feeling good about it. The director even emailed me the next day to let me know that I was his first pick for the character but that the money guy in Dubai would be making the final decision. I was cautiously excited.

Of course, the money guy in Dubai liked another more experienced actress better even though she didn’t surf at all. The director apologized and promised to write me into the script somehow.

I ended up playing the part of a lifeguard that gives the main character a couple of tips in the water at Malibu and pushes her into a few waves. Once again it ended up being an incredibly fun couple of days with great people including the orignial Gidget, Kathy Kohner Zuckerman. Stoked! I can’t wait to see the finished project. 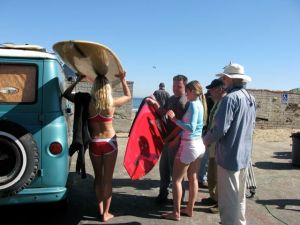 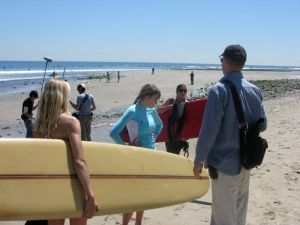 2 Responses to Filming for Beautiful Wave